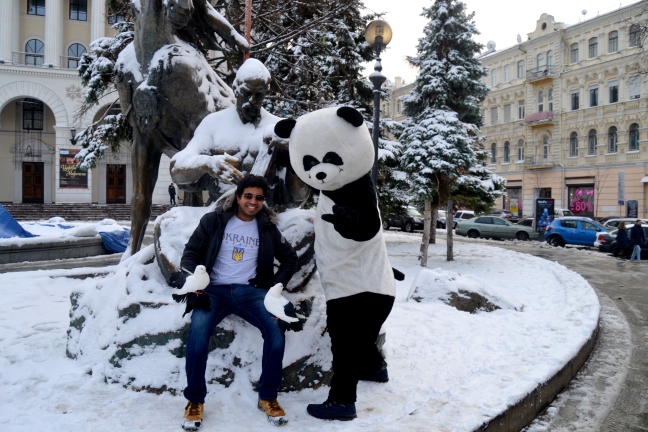 After exploring most of Europe, I was running out of places or flights were very expensive to the countries which I hadn’t explored. Also having Indian passport requires a visa for majority of countries, currently with Indian passport I can travel to only 59 countries visa free/visa on arrival. I was checking for visa free countries or places which have visa on arrival. Luckily Ukraine had started visa on arrival for Indian passport holders from March 2017 and flight to Kiev turned out cheap. That freezed my trip to Ukraine. It was an unexplored country by many and was also part of Russia till 1991 after which it became a separate country. I was pretty much excited to experience Soviet culture, see new places and enjoy altogether a different kind of food. Since it was yet another solo trip, I had to plan it very well. Sat for almost couple of weekends to get all details of public transports, places to visit, free walking tours to book. From various travels I realised once we get the flights and accomodation cheap, researching various public transport bus,train details, local food hubs is equally important to finish overall trip cheaply. That’s exactly what I did, not only did I see wonderful places also spent less and made it a memorable trip. To add on to that Ukraine had rich history, some of best orthodox cathedrals ornated with gold and a cool snowy weather to compliment wonderful photos. Time to breeze you through my Ukraine trip and all its glory.

Mouse over or click on the pics for captions and more info. 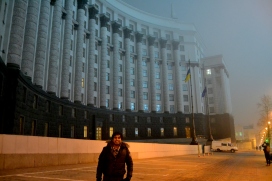 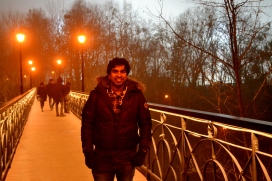 Tips before flying to Ukraine

Pechersk Lavra Monastery: One of iconic landmarks of Kiev is the Lavra, which is also a monastery of caves founded around 10th century is a UNESCO World Heritage site. Its an orthodox cathedral with narrow underground corridors leading to caves where various tombs of monks have been preserved for centuries. The complex of Kiev-Pecherskaya Lavra Monastery includes the Church of the Savior, Holy Trinity Gate Church, St Nicholas’ Church and the Great Lavra Belfry. The majority of the structures is built in the Ukrainian Baroque style. You should definitely do a tour of underground caves apart from visiting the main monastery. When I went it was about 10 degrees and super cold, snowy, but my colleagues and I loved this tour. We walked the covered bridge walkway to the old cave entrance. We toured the underground tunnels with a thin candle, seeing the old abbots and monks laid out for eternity. After exiting the bell tower, a church service was starting in the church nearby, and we even tucked in to hear the chanting monks. The most interesting part was the caves. Unfortunately you can not take pictures in many parts of the monastery. 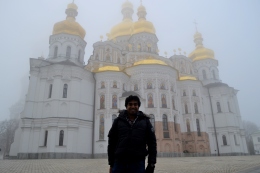 Saint Sophia’s Cathedral : Yet another UNESCO World Heritage site, you get to admire the amazing National Reserve Sophia Kievskaya. It was founded in 11th century and is one of the most significant constructions of old Kiev. It was quite enjoyable in spite of the snow and cold, and our tour guide had a long list of stories to tell about the founding of the site, and the ongoing saintly monks. I was lucky to peek inside the onion-dome roof of Saint Sophia Cathedral and note the amazing decor on the walls, and visit Saint Volodymyr’s Cathedral, the top cathedral of the Ukrainian Orthodox Church. I had to make short notes to remember all the history these cathedrals had to offer. I am so grateful that I took the opportunity to visit this site, and hope you’ll consider it for your next trip to Kyiv. 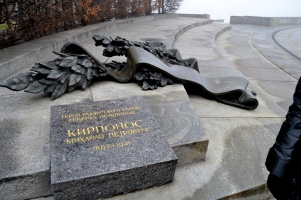 Maidan Square : Standing on Maidan or Independence square is priceless for those watching international news. It’s really a shaky moment when you realise that some years before people were fighting for their lives and their countries on the same pavement you stand on. Now, it is a bustling, beautiful place, sitting at the top of Kreshchatyk from where you’ll begin to explore the city. The square itself is well, nice, but the most important ingredient of its atmosphere is the history behind it. Maidan was a great central area for me to visit and it really helped in getting a feel for the city. Beware of the hawkers trying to get you to take pictures with them, I was a trap here and had to shell out some money later. Don’t be tempted, they’ll be after you for a couple of hundred hryvania each if you take pictures with them. I also spent ample time at a street market for souvenir shopping.

A snowy morning to wake

Golden gate : My walking tour started from the famous Golden Gates, which were the main entrance to the town of Kiev during the ruling of Prince Yaroslav. The name “Golden Gates” proceeds from the beauty of this building and not from the material it is made of. Strange mix of a stone centre surrounded by a wooden structure. In a very nice square surrounding by a great selection of bars and restaurant. Interesting history and on the top of the hill there is a statue of Yaroslav the Wise holding the city. As part of the Kiev walk, it’s got a little square you can hang out and sit with little mobile cafe. I actually couldnt go inside as I was short of time. I’d say it’s worth it to climb up the stairs and have a look from the top. There is a museum that can be visited as well. 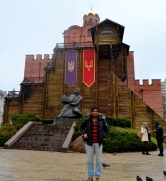 A lucky cat to stroke all your wishes

St. Michael’s Golden-Domed Monastery : You will uncover the history of this sight and find out that the original old Cathedral was ruined during the Soviet period but it was rebuilt few years later. Now it is a male Monastery and you can visit it and admire its splendid interior. There is another Princess Monument, who was one of the first Christian rulers of Kiev, standing in front of the Monastery. Overall it was just spectacular. Stay in front of this monument and admire the architecture. Unless you are very knowledgeable about religion the best way to experience the monastery is with a guide. I had a very experienced veteran guide on the tour and was able to tell me about the background of the monastery, and the meanings of the many images I saw throughout the day.

Saint Andrews Church : The pearl of my walking tour is St. Andrew’s Church, located right near mountains and is the cradle of Kiev. It was built in the Baroque style 300 years ago and now it’s one of the must-see sights of Kiev. The view crossing the bridge on the opposite side is just beautiful. What I found most impressive was to see the building again at night – the lighting really brought out the colors of the building. Picture perfect. The jewel-like finish, with its location on top of a hill, makes it a jaw-dropper. The interior is currently under renovation, but it is well worth it to pay the small fee to climb the stairs up to the church and walk around it.

Taras Bulba Restaurant : I would say this is one of quaint and themed restaurant found in Ukraine. I had the best traditional food, reasonably priced and loved the ambience very much. Meat lovers can have an amazing lunch here. It wasnt posh or luxurious to see, but was so grandly themed out and decorated in Ukrainian style. I got to try out Vyshyvanka, an embroidered shirt, traditionally considered peasant and serf clothing. Ukrainians usually wear it on holidays as tribute to folk traditions and as symbol of patriotism.

Ukraine turned out to be a historic trip in my travel diaries filled with rich soviet monasteries and monuments. Best climax to my trip was the flight cancellation, which was due to snow storm and winds. I had to stay an extra day, but once the blizzards had stopped I got to experience the best snowfall locations across Kiev. I walked around the white heaven and was a dream come true trip. Signing off with some of snow memories in Ukraine.

Walk across a park in Kiev

Time came to a frozen lapse

Timeout with some pigeons 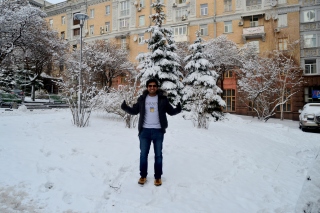